Montesquieu in his Vineyard – the full story of the Winemaker Philosopher 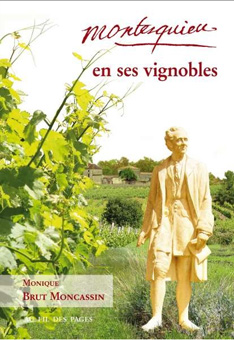 The great Montesquieu was, at heart, a simple man: a Gascon with a sing-song accent, uncomplicated taste in clothes, an easy manner and the down-to-earth common sense of a farmer, picked up during his childhood; he was also a provincial noble, aware of his privileges, and well-versed in the quibbling, haggling world of the merchant-winemaker. His literary, society and love life in the Parisian salons of the Age of Enlightenment, facilitated by the beautiful marchionesses and brilliant minds of the Regency, and crowned with the glory of the publication of his Persian Letters puis de Spirit of Laws, has tended to overshadow the picture of a wine producer concerned with developing his land, the success of the harvests and sales of his renowned wine.

Monique Brut Moncassin presents the ambassador of Graves in a lively, complicitous style: the impassioned owner of vineyards that gave him the financial independence that he needed to write and think as he wished.

Follow him through the vines, from the Gironde to the Agen region, with correspondence received or written more than 250 years ago, by the surprisingly modern hand of Charles-Louis de Secondat, better known as Montesquieu…